Negros Island was originally called “Buglas”, an old native word that is thought to mean “cut-off.”

It is believed that Negros was once part of a greater mass of land but was cut off either by what geologists all a continental drift or by rising waters during the so-called glacial age. Among its earliest inhabitants were dark-skinned natives belonging to the Negrito ethnic group with their unique culture. Thus, the Spaniards called the land “Negros” after the black natives whom they saw when they first came to the island in April 1565. Two of the earliest native settlements were Binalbagan and Ilog, that later became towns in 1573 and 1584, respectively. Other settlements were Hinigaran, Bago, Marayo (now Pontevedra), Mamalan (now Himamaylan) and Candaguit (now a sitio in San Enrique).

After appointing encomenderos in the island, Miguel Lopez de Legaspi placed Negros under the jurisdiction of the governor of Oton in Panay. In 1734, however, the island became a military district and Ilog was made its first capital. The seat of government was later transferred to Himamaylan and thereafter Bacolod became the capital in 1849.

The island remained a military district up to about the middle of the 19th century. Then in 1865, Negros Occidental was raised to the category of a politico-military province. During this time, several more towns were established like San Carlos and Calatrava.

Religious orders evangelized the province by turns: the Augustinians, Recollects, Jesuits, Dominicans, Seculars and again, the Recollects returning in the 1800s.

The latter half of the 19th century was a period of rapid economic expansion for Negros Occidental as evidenced by the growth of population resulting from the influx of immigrants coming from neighboring provinces like Iloilo, Antique, Capiz and Cebu. They settled in districts sparsely inhabited in the past and this resulted in the establishments of new towns: Saravia (now E.B. Magalona), Valladolid and Escalante in 1860.

The major boom to the province at this time was the widespread cultivation of sugarcane and the opening of ports like those in Iloilo and Cebu to foreign commerce. In 1856, Negros Occidental produced only 4,000 piculs of sugar. This increased to 100,000 piculs in 1864 and 2,000,000 in 1893. The cultivation of sugarcane then became widespread and soon after Negros Occidental led other provinces in the production of sugar. Modern machines were also introduced at this time and by 1864, seven machines operated by steam were used in the towns of Bacolod, Minuluan (now Talisay and Bago).

During the last decade of the 19th century, several important events occurred in the history of Negros Occidental. One was the making of Negros Occidental as a separate province from Negros Oriental in 1890. The other was when Negrense revolutionary troops led by Generals Aniceto Lacson and Juan Araneta joined the nationwide-Katipunan Movement and overcame the Spanish garrison in the province on November 5, 1898 when the Filipinos rose in arms against the Spanish rule. The revolt ended more than 300 years of foreign domination.

This resulted in the establishment of the short lived “Cantonal Government of the Republic of Negros” which reunited the two provinces until the Americans arrived in May 1899. A civil government was established in Negros Occidental on April 20, 1901.

During the succeeding decades between 1901 and the 1930s, Negros Occidental was under the American occupation as with the rest of the country. Nonetheless, the economic growth continued especially with Philippine sugar having a part of the US market despite some accompanying socio-economic problems during this period. When the Japanese landed in the province on May and instead organized a free government and guerilla movement under Gov. Alfredo Montelibano, Sr. in Negros Island. They helped bring about the surrender of the Japanese forces in Negros in 1945. The history of the province for the post World War II period has yet to be formally written. Suffice it to briefly note here that this was mainly a period of rehabilitation from the destruction of war. With the sugar industry, the major pillar of the province’s economy, as well as other areas being revived, consequent socio-economic growth in the province followed.

The socio-economic life of Negros Occidental from the 1950s up to the 1980s depended as before mainly on the sugar industry. Producing annually about 60% of the country’s sugar output, an expansion in the industry with the establishment of several new mills in the late 1960s spurred increased production. A downturn caused by the low world sugar prices in the early 1980s was followed by possibly the worst industry and province-wide crisis starting in 1984 with the world sugar prices hitting rock bottom in 1985. The province was also hit by two destructive typhoons in 1984, Nitang and Undang, after a serious drought in 1983.

The year 1985 also marked the period when Negros Occidental became known throughout the country and abroad as suffering from historic socio-economic crisis. Various forms of international aid were sent to Negros and many Negrenses , national and foreign government and government organizations, responded in cooperation with the Philippine Government to help the province cope with the crisis.

While the country was simmering like a volcano that later erupted at EDSA in February 1986, Negros Occidental was split into two provinces after a plebiscite in Cadiz on January 3, 1986. Negros Occidental (mother province) was left with 3 cities and 18 municipalities while Negros del Norte (new province) had 3 cities and 8 municipalities starting from the City of Silay to the northern tip,San Carlos City, including the new town of Don Salvador Benedicto. The creation of this new province was, however, opposed by the Negros Anti-Partition Movement and the Supreme Court declared the creation unconstitutional on July 11, 1986. On August 18, 1986, Negros del Norte was formally returned to Negros Occidental, thus making the province whole again.

Toward the end of 1987, the rays of hope started to shine when the overall economic situation showed an upturn. The campaign for agricultural diversification had been gaining momentum, paving the way for more landowners to invest in prawn farming, livestock and high-value crops such as fruits, vegetables and other cash crops.Investments upswing became apparent by 1988. The participation of the industrial sector accelerated consumer economic growth and development manifested by the increase in sales of consumer goods and by-products.

However, just when the economic boom was beginning to seep in the overall economy of Negros Occidental brought about by the acceleration of various economic activities, the recurring ills of the sugar industry in the second half of the 1990’s slowed down the continuing economic uptrend of the province. Nevertheless, with the widespread benefits brought about by the positive changes in the socio-economic condition of the province by the 2000’s, clear sign of economic recovery for Negros Occidental is anticipated. 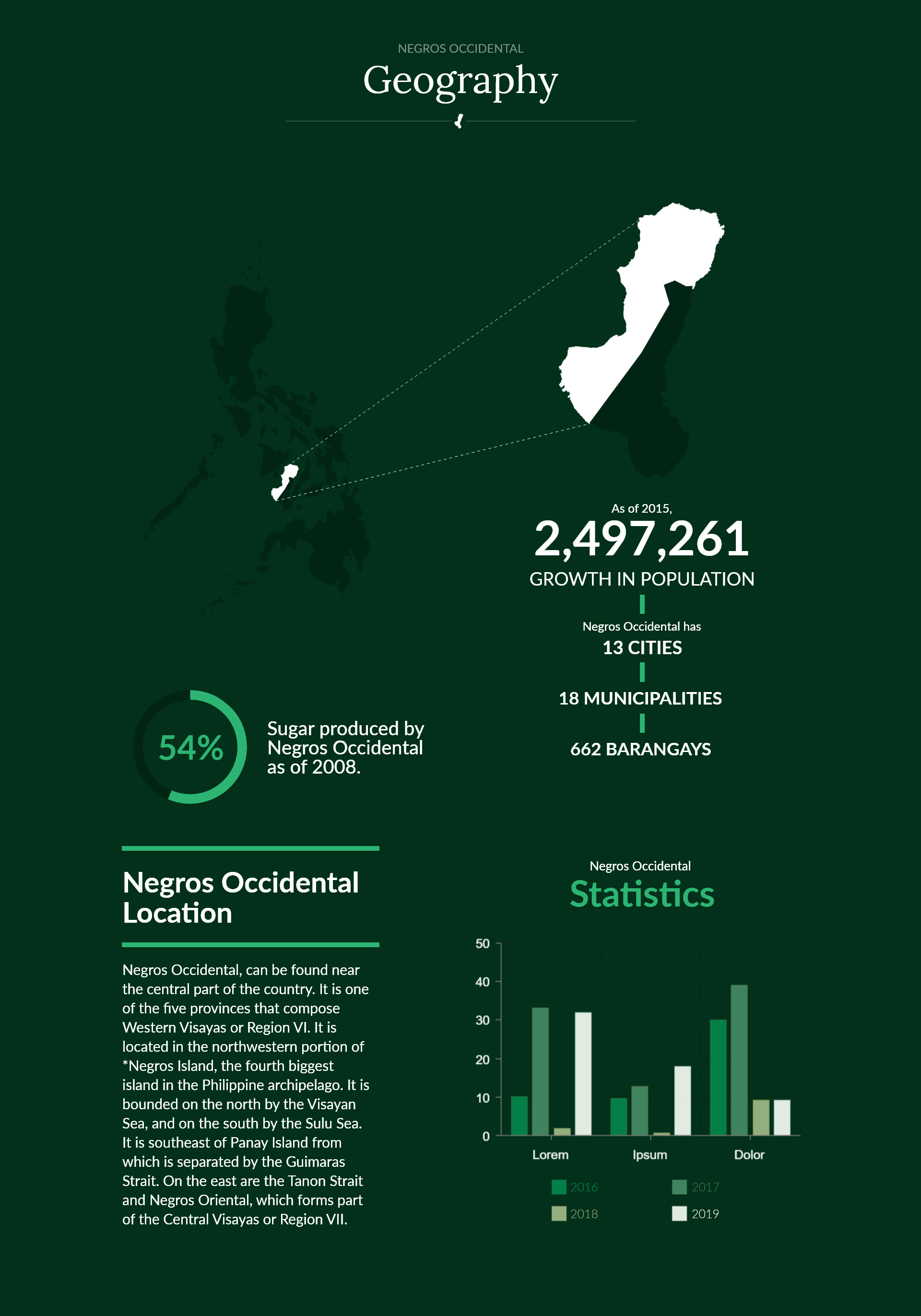 We shall sustain our delivery of services to the fullest of our abilities, harnessing our potentials, and building more meaningful teamwork;

We will hold and promote at all times the principles and policies of the Provincial Government; and

Cognizant of our avowed purpose, we commit ourselves to make Negros Occidental a challenge to the adventurous,
a haven for the travelers, and a real home
for the Negrense.

“An empowered and healthy Negrense in a globally-competitive, ecologically balanced and peaceful Negros Occidental under a responsive and accountable governance.”

We, the officials and employees of the Provincial Government of Negros Occidental commit to serve our clients promptly, courteously, with care, competence and with the highest degree of integrity and accountability.

We shall also seek to maintain a clean, safe, and well-equipped workplace with a friendly and professional atmosphere, as we endeavor to leave our clients satisfied and empowered.

So help us God.